Whilst following this training program it is important to understand a few rules to get the most out of the training you put in.

If you currently do none or very little running then you can’t jump in at the deep end. Running is very strenuous on the muscles, bones and joints and doing too much too quickly during the initial 3 weeks is likely to result in injury. You need to condition your body to withstand the stresses and strains it will be put under during training. Thankfully though, the human body is pretty resilient and very adaptable and by following these guidelines you should feel ready to progress on to the next phase comfortably. 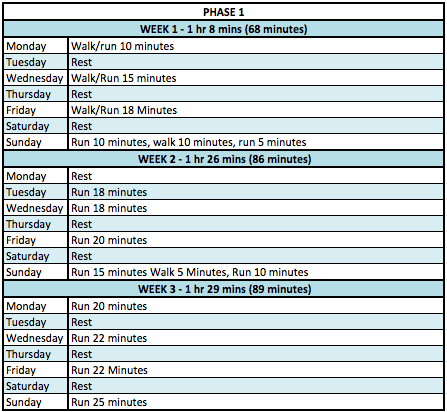 Aerobic Capacity put simply is the amount of oxygen the body can utilise per minute during exercise. The more oxygen your body can breathe in and send to the working muscles, the more efficient you will become allowing your muscles to work longer before fatiguing. This phase is fairly simple, you lengthen your runs and you work at your ‘aerobic threshold’ twice a week but the science behind it is not so simple. See below for more info. 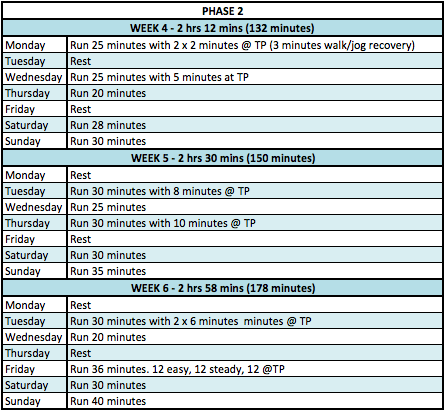 What is aerobic threshold? I hear you ask. Well I’ll tell you. Aerobic threshold (sometimes called lactic threshold or tempo running) is a given pace or effort that one can exercise at (in our case run) where the body is at its limit (or threshold) before the onset of lactic acid occurs. Typically this is around 80%-85% of your maximal heart rate and is completely individual as every ones physiology is different. There is a fine line between running at your aerobic threshold and being slightly over. If you’re unsure it’s always better to play it safe and run a bit slower than go too fast and blow up. It’s actually very important that you don’t go too fast as this is a very specific type of training with an outcome that will only work if its done correctly. The idea of it is to increase the bodies’ capacity to working at this effort in order to run further distances, at faster speeds but still staying under that magic threshold effort where you don’t build up the dreaded lactic acid. This will ultimately be just faster than the pace you should try to run your marathon at.

Humans have three energy systems that we can use to exercise: aerobic, anaerobic and neuromuscular. Aerobic is working with oxygen and is used for endurance exercise (typically 10,000m and longer), anaerobic works without oxygen and is used for middle distance events (typically 800m-3000m) while neuromuscular is used for sprinting and power events. The 5000m require both a big aerobic capacity and lots of lactic tolerance, which makes this event very hard to train for at the highest level. If you watch professionals run a 10,000m race, it will generally be run at a medium pace and then they will sprint or ‘kick’, the reason they are able to kick is because they have only been using their aerobic system and not built up any lactic acid. When the end is near and the athletes start to sprint, the body automatically switches over to the anaerobic system. Often the winner is the person who has the highest tolerance to lactic acid or the one who was working within their aerobic system for the longest. The guys who cant kick will have already been running too fast for their ability and would have converted over to their anaerobic system long before the sprint finish begins. The 800m, on the other hand is very different. This race is run completely with the anaerobic system so this event becomes not about who has the fastest kick but who slows down the least. Often in this event every 200m split is slower than the previous. If you’ve ever wondered why the last lap in the 5,000m or 10,000m is often faster than that of a 1500m it’s all to do with the physiological systems the events require. 10k running is 100% aerobic so most of the training over the 10 weeks will be geared towards improving this system while increasing the tolerance to remain working within the aerobic system but at a faster pace and for longer periods of train. This is basically all we are trying to achieve. A lot of people think they need to work on their speed. And devote whole sessions to it. A few strides after steady runs is speed work, any more than this is bettering a system that we will not use and quite frankly is a waste of time.

Now that we have a pretty big aerobic base to work from we can now start to implement 10k specific training. This will be a mixture of steady running, sessions and long runs building up in either intensity or volume week on week to prepare your body to withstand 10k. It will be key to listen to your body during this phase as it’s the hardest and longest phase of the program. If something starts hurting and you have to miss a day or change things round a bit then by all means do it. Remember that this is just a guide and is not gospel. Missing a few days won’t make much difference over a 10 week period but don’t make the mistake of trying to make the training back up if you do have to miss some training though. 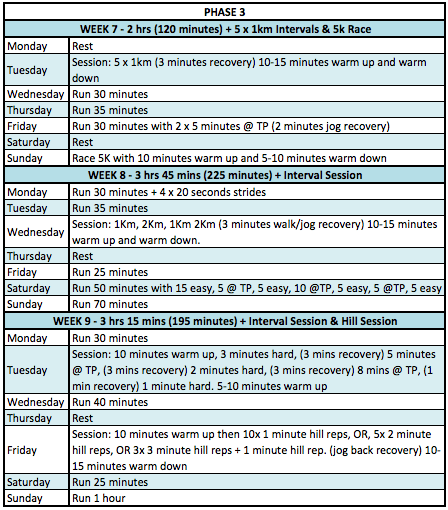 This is the best part of the schedule, this is where we start getting the body ready to race. In this phase the training will slowly start to trickle down and rest up so you’re ready to hit the race hard.