My name is Tamara Luong, I’m 35 years old, live in London with my husband Kevin and our little frenchie Baxter, am a lawyer.
I started running only about 2 years ago, for the simplest reason – to get healthy and fit. Never having run before, I couldn’t even run for 3 mins straight without almost dying!
But I kept at it, and slowly slowly I got stronger, my endurance got better, and a few months down the line I remember completing my first 5k in 32 mins and feeling so proud.
Inspired by my friend Jodee, who is an excellent runner, I then signed up for my first official race – Colchester Zoo Stampede, organised by RunThrough in October 2019. This was the funniest story – as by some silly mistake or lack of attention on my part – I thought I was signing up for a 10k run, but on the actual morning of the race, just 30 mins before the start of the race, I realised I was about to run a half marathon!
Too embarrassed to admit my own silliness, I was determined to try and give it a go, and to my biggest surprise that day I completed my first half marathon in 2:13:51 (never having run more than 10k, and of course having done zero training for a half marathon!). It was such an incredible feeling and a little moment of pride, when I saw that finish line at the end and my husband cheering there for me.
I have been running regularly since. Running was a huge help for me during our first lockdown in London, physically and mentally. I signed up for a number of virtual races – and in a way feeling that I wasn’t running alone, was a part of a bigger community, and receiving those special packages in the post with my medals at the end of each completed race – was truly motivational and kept me going during some tough times this year.

I loved the idea of the Virtual Marathon Series from the start – mostly because it’s given me a chance to do something I would otherwise have never been able to do – participating in the marathon majors felt like something that could only ever happen in my dreams!

Also, being able to complete the marathons by breaking the distance down into shorter runs I could actually physically take on was definitely a bonus! And in a way a very positive thing for me – as splitting into shorter distances ensured consistency in my daily and weekly running – I had no choice but to stick to regular running if I wanted to complete the challenges, no excuses! 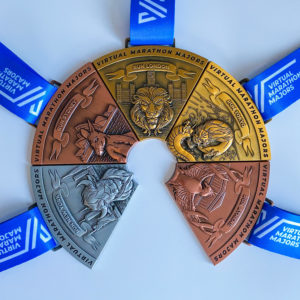 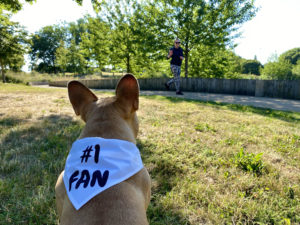